Warning: "continue" targeting switch is equivalent to "break". Did you mean to use "continue 2"? in /home/pthbh7zcgge6/domains/silentstarsbook.com/html/wp-includes/pomo/plural-forms.php on line 210

Warning: "continue" targeting switch is equivalent to "break". Did you mean to use "continue 2"? in /home/pthbh7zcgge6/domains/silentstarsbook.com/html/wp-content/plugins/revslider/includes/operations.class.php on line 2492

Warning: "continue" targeting switch is equivalent to "break". Did you mean to use "continue 2"? in /home/pthbh7zcgge6/domains/silentstarsbook.com/html/wp-content/plugins/revslider/includes/operations.class.php on line 2496

Warning: "continue" targeting switch is equivalent to "break". Did you mean to use "continue 2"? in /home/pthbh7zcgge6/domains/silentstarsbook.com/html/wp-content/plugins/revslider/includes/output.class.php on line 3468
 Silent Stars: Read an excerpt of the Christmas story 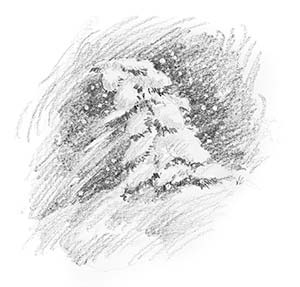 It shouldn’t have been dark. But it almost was, with the storm so close about the town. Later, as I searched my memory for all the details of that day, I realized how unusually dark it had been.

It was a few days before Christmas, and I was driving through the mountain passes to our family’s cabin. The forecast had called for overcast skies and an inch or two of snow, but as I came over the last rise above the scenic valley, an unexpected sight met my eyes: a thick body of clouds, a dark, nearly black storm centered over the town.

As I drove, my eyes were drawn again and again to those clouds. Had I ever seen anything to compare to them? They looked as if they could produce enough snow for an entire winter, let alone the Christmas holiday. Perhaps I should have reconsidered before I ventured into that storm, but I didn’t.

A last-minute decision had led to my traveling up to the mountains a day ahead of my family. My husband, Tom, had suggested I take a day for myself, away from our family’s hectic pre-Christmas rush, and the idea had appealed to me. I wanted to go. In fact, I was determined to go. I made an unusual choice for that family-focused time of year; I took him up on his offer and found myself on my way to the cabin.

“Looks like quite a storm!” the attendant announced as I pulled into the service station on the outskirts of town. He told me he didn’t approve of travel at the holidays and expressed concern at my traveling alone in the storm. He always stayed home at Christmas and admonished me to do the same. I began to recite the forecast to him, pleased with the information I could share, but then stopped, distracted by the realization that snow was starting to fall.

Surprised, I looked up and had a feeling of foreboding as I saw the rapidly approaching storm. “I better get on my way,” I said to him hurriedly, turning back only briefly to call out, “Merry Christmas!”

A light scattering of flakes dusted the car and blew off the road before settling. The fresh snow added a finishing touch to the already decorated town, leaving it pretty, wintery, and “Christmassy” enough for the season.

As I drove through the center of town, I noticed a girl along the side of the road, walking in the direction I was headed. She wore no coat, only a dress of an outdated style. In her hand was a lantern, a small beacon in the gathering dusk. Although it seemed unusual for her to be out, she did not appear to need or want help, and I did not slow down. The girl did not look at me as I passed, although I had the impression that she was aware of me.

The snow began in earnest as I left the main part of town, extinguishing within a few moments any remaining confidence I held in the forecast. Large heavy flakes pelted the windshield and, combined with the gathering darkness, challenged my ability to see. An eeriness crept in with the approaching nightfall, and I remembered that it was the winter solstice—the approaching night would be the longest night of the year.

The clouds, heavy and low above me, appeared just high enough to permit my passage. Clouds, snow, and wind created a tunnel through which I passed. Walls of white surrounded me as I drove, but strangely, the road ahead remained clear. I wish I had even once glanced behind me. I am certain that, had I looked, there would have been no clear path back toward town, only the darkness of that storm.

Comfortable with the familiar road, I drove on. I would make it to the cabin and then worry about getting back out, if necessary, sometime the next day. A wave of relief washed over me as first the garage and then the cabin came into view at the bottom of our narrow lane. Boy Scouts had dutifully delivered a Christmas tree and left it leaning against the woodpile. I pulled the tree into the garage with me, shut the door on a scene of blinding snow, and was inside and safe. My anxiety gradually disappeared in the pleasure of simply being there. I walked through the quiet rooms, remembering past family gatherings and anticipating the holiday ahead. All seemed well.

Three generations ago, an opportunity for a job at the sawmill brought my great-grandfather and his family to the 1920s precursor of today’s much larger resort town. They built a small home on the land where our family cabin now stands. The original home was much more of a cabin than the present-day structure, but we always called it our “cabin” even after rebuilding it as a much larger vacation home. Although no one in the family had lived in the house year-round since my great-grandfather’s death, the property was never sold. It was an ideal location for a vacation home, and I had spent holidays and summer weeks there all my life.

My great-grandparents had wanted to be outside of town and had chosen a densely wooded property on the shore of the lake, bordered by a stretch of picturesque beach. For years, the area remained secluded until the small town grew around our property and spread beyond. Now, during a busy summer week it feels as if there are people everywhere.

I stopped in the great room in front of the large windows that faced the lake. The glass and the covered deck were all that separated me from the fury of the storm. Images of the property in the sunshine passed through my mind . . . hot summer sun pouring down on us . . . the appearance of a rainbow across the lake following an early morning rain . . . the sun setting in our faces in the summer, bathing us in warm light. If the sun had been out that afternoon, the light would have filtered softly through the trees onto the cabin before the early sunset brought a close to the short day. But in the dark of that winter afternoon, I could see nothing other than the storm itself. The snow would stop eventually, though, and the sun would come out. I knew what it would look like, and it would be perfect.

I turned from the windows to admire the great room. With its picture windows and spectacular fireplace, this warm, inviting room was the heart of our cabin. Great-grandfather’s love for intricate, detailed woodwork was evident in the home, which was filled with his creations. Several years ago my father and his sister, my aunt Terry, built our current cabin around the fireplace, living room, and the largest bedroom from the original home, retaining most of his work. As a young child in the old home, Great-grandfather’s hand-built stone fireplace, hearth, and chimney were almost overwhelming to me. Now, as an adult, they are still impressive, even in this much larger room.

When we remodeled, the wall of the cabin facing the lake was built around two solid wood Dutch doors from the original structure. Great-grandfather’s doors remained where they had always stood, opening onto the patio and toward the lake. These double doors welcome light into the house when the upper sections are thrown open to the outside. Great-grandfather had carved four star-shaped windows in the doors. Tremendous effort must have gone into making these unique windows. There is a personal quality to the stars, and I have often wondered what they might have meant to my great-grandfather. The largest is simple and unadorned, while the others are more detailed. The smallest is the most intricate, with more flourishes than the others and set a little farther apart. The stars make a striking and complementary group, despite their different styles. On sunny days, filtered light wanders through them, creating vague patterns that move along the floor as the sun passes through the afternoon sky.

The cabin offered many clues about the man who was my great-grandfather, but little about his daughter Laura, my grandmother. Although she grew up in the home, lived in it for a few years following her marriage, and visited often later in life, few things remained there to remind us of her. I remembered her as a quiet woman who kept much to herself, and I doubted if I had ever really known her. Though I never met my great-grandfather, I felt I knew him. Everything he left us was personal, warm, and welcoming.

The phone rang, startling me. It was Tom, concerned about my arrival. “No, I’m fine, sorry, forgot to call . . . Yes, excited to be here. The weather was so much worse than the forecast—it’s still snowing like crazy out there . . . How are you and the kids? . . . Drive safely tomorrow, hopefully the roads will be okay by then . . . Love you . . . Good night.”

Snow always made it feel like Christmas, and the storm would take care of that part of the holiday décor. After Tom and our children, a cousin’s family, and my aunt Terry arrived the next night, we would decorate the tree and put up strings of lights. I couldn’t wait for one tradition, though, and I put out my great-grandfather’s nativity set.

I set up the nativity in its usual place of prominence between the entryway and the great room. I took care to arrange the hand-carved figures as I had done so many times in my life, stopping to admire each one as I took it from the box. I searched the soft faces on the figures and sensed my great-grandfather smiling at me through them. As always, the set seemed incomplete. A single shepherd filled the role of, “And there were shepherds abiding in the fields, keeping watch over their flocks by night.” Painstaking effort had gone into the creation of the set, so my sister and I thought that there must have been at least one additional shepherd who had been lost over time. The remaining one did his job faithfully, however, watching over the small flock, year after year.

Buy the book now at Amazon